How Web3 and Blockchain Would Impact Businesses 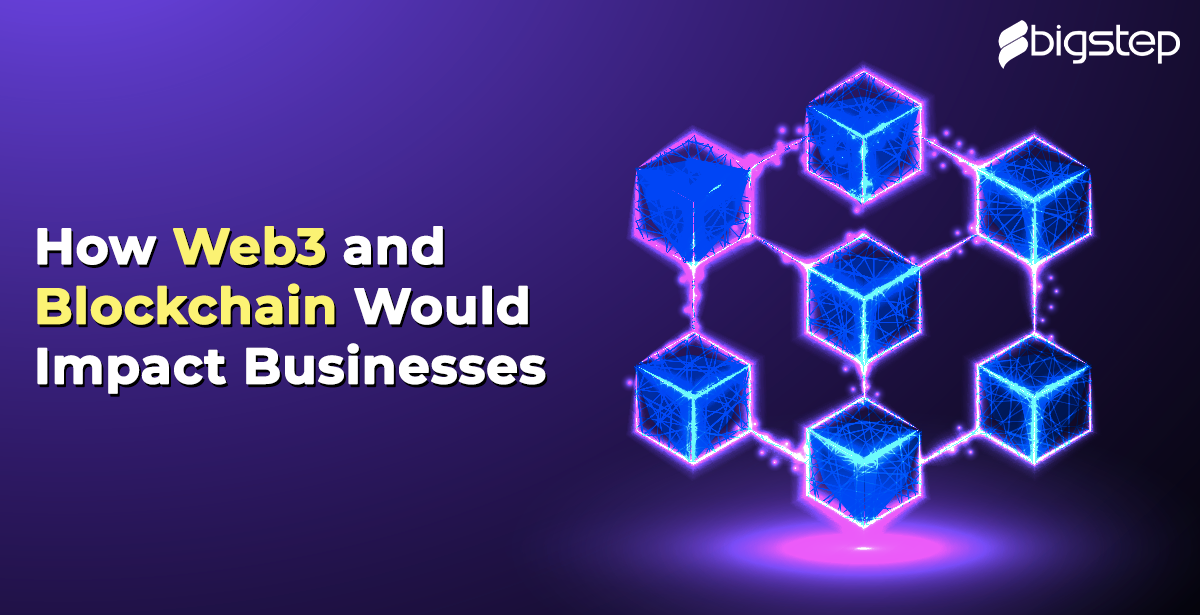 Web3, powered by the most disruptive technology of our time, is poised to change the way businesses operate and internet users interact with the digital world. In this article, we take an in-depth look at Web3 and Blockchain – what it is, what it entails, the benefits it brings and the industries it would revolutionize, and how a company can use Web3 technology to gain a competitive advantage.

The answer to Web3 technology is – it is a fair and transparent network where people will communicate without fear of losing security or privacy. The web version will make the internet intelligent by combining the power of artificial intelligence and Big Data – all while creating the semantics of the web.

Web3 is the time when the web will be powered by Blockchain to become more human.

Blockchain will drive the process of collecting and managing data on the web. The technology will combine all the concentrated data using AI and IoT and convert it into information that cannot be hacked or duplicated.

The transition from Web 2.0 to Web3, even if we have minimal to zero impact on end users, will bring about a revolutionary change in the backend. For the client-server model to become open and decentralized, the underlying technology stack of the web will have to change.

While typically the application is maintained at the top layer in the technology stack, this is different with a decentralized solution, as the Blockchain elements are mainly focused on the back end. This is why there are more elements at the application level as an answer to how the Web3 IT stack will work.

The development of semantic technologies can improve the use of Web3 and Blockchain. For this technology to become a data protection tool, it is essential to base it on Blockchain logic. Because the actual Blockchain logic will ensure that we locally transfer our data. The peer-to-peer review system will inform users about the construction of data blocks.

Why is Blockchain important for your business?

The impact of Blockchain on business will be inclined to be transparent and highly user-centric. Everything that was wrong with how businesses were run in terms of user data is about to experience a revolutionary change.

To answer how will businesses use Blockchain technology, businesses – both traditional and emerging – open the floodgates to Blockchain and the possibilities this technology brings. You will see your applications get a Blockchain upgrade where everything will be transparent and accessible to everyone.

Advantages of Web3 and Blockchain

Blockchain technology features will bring privacy and antitrust models to the table. It will not incentivize centralized platforms that have control over user data in their hands. In the center, we will see a turnaround with decentralization and privacy. With users now in control of how their data is viewed, the monopoly of tech giants will end and there will be fewer to zero incidents of privacy hacks.

Blockchain will be much more secure than any other technology. Due to the decentralization and distributed nature, it will be impossible for hackers to penetrate the network without the operation being traced back.

Until now, user-generated data has been managed and exploited by tech giants. With Blockchain powered by Web3, end users gain complete ownership of data. Data transmitted over the network will be completely encrypted. Users will be able to decide what information they want to share with corporations and advertising firms and will be able to monetize it.

Web3 and Blockchain features would allow users to access data across different applications without having to be on any particular platform. This means you won’t have to worry about a single device being accessible while others aren’t.

Blockchain will not need a central authority. Anyone will be able to join and participate in the network by creating an address. This eliminates the occurrence of user bans based on their gender, income, orientation, geographic, or other sociological factors. It will also allow digital assets and wealth to be transferred across borders in a timely and cost-effective manner.

The future of Web3 and Blockchain

Web3 and Blockchain are redefining how we interact with the digital world, and the change won’t just be for individuals. The impact of Web3 and Blockchain on businesses – both traditional and disruptive – will be equally massive.

However, this transition will not happen overnight, which means businesses will have time to look back at their process and see where they fit on the decentralization and transparency radar. But while Web3 and Blockchain are in the future, today’s reality is that businesses need to start preparing.

Content writer with a passion to write for a variety of niches to broaden my horizon as a professional writer.